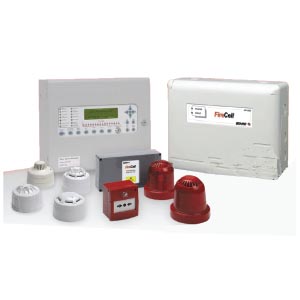 With more and more dependence on wireless products in our everyday lives it was inevitable that things would change in the security and fire marketplace.

The use of Bluetooth, Wi-Fi and 4G seems to be included in almost everything we use, from those items we expect, such as music players, and those that we do not, including fridges, with the latest item being a coffee maker!

The big difference is that, if our connection is intermittent or drops when we are ordering coffee pods or listening to the latest tune from Ellie Goulding, whilst inconvenient and annoying, it’s not a matter of life or death.

With safety systems, especially fire, it could be!

Wireless based fire detection technology has been used for many years but has been seen as niche, used in heritage or difficult to wire sites, but all that has changed in recent times. The introduction of EN54-25: 2008 dramatically changed the way wireless fire systems and technologies are now being used.

EN54-25 set standards which some early wireless developers and manufacturers could not meet as the bar was set extremely high, and rightly so. With many defined requirements documented, the objective of the standard was to ensure that any wireless based fire system was both robust and reliable and that meant there had to be definitive and measurable requirements.

The paramount objective of the standard is to ensure that a wireless fire system is “as efficient and stable as a wired system”. This guarantees that any wireless system or component certified to EN54-25 is no different to any other wired equivalent in its operation, its reliability and its effectiveness.  Wireless technology however has many advantages.

Because of these advantages, wireless adoption across the fire industry has been rapid, with most major fire manufacturers now offering proprietary wireless technology as a complimentary product to their existing portfolio or partnering with established wireless experts who have many years experience and knowledge.

We are seeing substantial growth in wireless market share, over and above industry growth, as more and more systems use a combination of wired and wireless to meet the varying challenges of fire safety.

The term hybrid is now part of a fire designer’s vocabulary and provides them with the ability to produce flexible schemes for every application whatever the challenges. Gone are the days of red fire cable across glass and steel structures.

We also see the use of wireless when working buildings are being upgraded or refurbished, less inconvenience and faster installation. A wireless callpoint or detector can be installed simply using two screws and the task completed well within 10 minutes, try that with cable!

But it’s the mix of technologies that is shaping the future of the fire industry with traditionally cabled devices in areas where access is easily achieved and non intrusive and wireless variants in limited access positions or areas in constant use. Combine this with the ability to wirelessly connect panels and other systems and the days of pulling cable through congested ducts or digging trenches for new access points are gone. All this adds up to efficiency for the installer and cost savings for the user, real solutions for each building risk.

Looking at typical applications, let’s take the example of an educational establishment. One of the main challenges is time, limited windows in which to actually carry out an installation whilst students are off site on term breaks. Then there is the plethora of buildings found typically on such a site; some can be remote from the main building(s) and some can be of a difficult to wire structure. Some still have construction materials which mean that the structure cannot be interfered with or drilled into; all of these can be overcome using a wireless or hybrid solution.

Another example is a hotel installation. The main criteria here would be the downtime of room availability and loss of revenue. Again using the hybrid approach, rooms could have wireless devices fitted almost whilst housekeeping is making up the room. The detector, sounder and VAD would be fitted in minutes leaving no damage to the décor and no mess to be cleared away, ready for the next day’s guest to arrive.

Another big advantage is that high power devices like sounders and EN54-23 Visual Alarm Devices are not reliant on power from the control panel if wireless variants are installed, as power is delivered from internal batteries. This can lead to considerable savings as all address slots can be used. Compare this with a fully wired system where there could be limitations on the amount of devices on each loop leading to an increase in power requirements, battery calculations, and additional loops and perhaps even an additional panel.

Wireless for all Fire Systems

A recent development in technology has seen the introduction of wireless interface modules or gateways. These can be installed onto a wired system to provide a number of wireless devices of any mix, typically up to 30 per interface.

There are various configurations, with some being fully protocol integrated into the main system, giving full and comprehensive information at the control panel, and variants which are less intelligent but can be integrated into almost any system be it addressable or conventional.

With the introduction of EN54-23:2010 and the requirement for Visual Alarm Devices or VAD’s wireless gateways make a lot of sense. As previously mentioned, the high power requirements of these devices can be challenging for a designer as well as adding significant cost. The use of a wireless interface will allow the installation of VAD’s, as well as any other devices such as detectors, callpoint or sounders, quickly without the worry of affecting the system power capabilities and its standby. An interface and devices could be installed and commissioned in a few hours.

Despite the stringent requirements of the EN54-25 standard there are, however, still a few misconceptions surrounding wireless fire which need to be addressed and finally laid to rest. Issues such as reliability of the signal and interference are often at the top of the list, but a fully EN54-25 compliant system has to provide signal overhead levels to compensate for any attenuation or blocking and a survey before any installation will identify any background noise. With a wide choice of channels to use within the agreed European 868MHz frequency, and this built-in overhead, signal loss or unreliability is just not an issue.

The other big misunderstanding is cost of ownership as batteries need replacing. This however is a minor cost as wireless devices with two sets of batteries (to meet BS5839 – two power supplies) typically need changing at around four years with normal usage and can last up to five years. EN54 does stipulate that batteries should last a minimum of three years but, with increased efficiencies in design and improved battery technology, this is easily eclipsed. In addition changing a set of batteries costs little more that £2-£3 dependant on the device (sounders use larger batteries).

To put this in perspective over a 10 to 15 year lifetime there may only be 2 to 3 battery changes – compare that with the cost of a full wiring test!

Thinking ahead to FIREX 2016, and to new technologies based on wireless infrastructures, there will be innovations around the use of remote diagnostics as well as system wide information being available from anywhere by an engineer or technician using wireless.

Using the internet, mobile networks and cloud based services to glean information and carry out non emergency tasks and data gathering will make things easier for both supplier and customer. A system configuration and history can be remotely and securely held ready for an engineer’s use when needed; no more searching for print outs, backups and outdated files. This is just the tip of the iceberg as new ideas are developed, embraced and utilised.

The future of all business sectors, not just the fire and safety world, is set on a course of using technology to make things easier, quicker and safer the challenge will be to take full advantage of what is possible now and tomorrow.